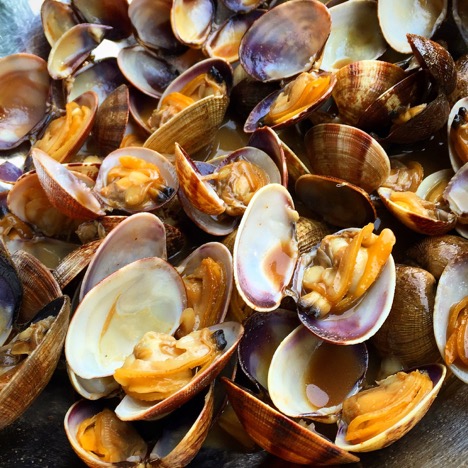 Manila clams, also known as Japanese littleneck, steamers, Filipino Venus, Japanese cockle, and Japanese carpet shells, are found from British Columbia to Northern California, but that's not their original habitat. Manila clams were introduced by mistake in Washington state waters in the late 1920s, hitching a ride in barrels of oyster seed from Japan.

Sustainably—farmed in the Pacific Northwest, mostly in my home state of Washington, and up in British Columbia. Unlike other forms of seafood farming, clams have little negative "environmental footprint", being pen-hatched, and then raised in the cold, wild waters of the Pacific Ocean.

Of all clams in the kitchen, Manilas are the sweetest (and smallest) hard-shell clams you're likely to cook. Packed with flavor they're one of my favorite bivalves, second only to fresh oysters. Manila clams can grow to eight inches across (7-10 years), but most that are used of steaming are 3-4 years old and are usually less than three inches.

Here, the clams are steamed with sake, soy, ginger, chilies, and sugar, then tossed in a butter-broth reduction. These are, handsdown, the best Manila clams I’ve ever eaten!

Preheat your Caja China with 8lbs of charcoal. Once coals are evenly gray (20-25 minutes) spread the charcoal evenly over the tray. Careful move tray to the handles and place the clams (on the roasting rack) into the box with the small pan of butter, and your pre-lit A-MAZE-N (AMNPS) Smoker.

Remove the two end-rails from your roasting box for airflow (this creates a ¼ inch gap at either end) and set the smoker on a corner of the sheet pan (allowing for airflow beneath.

I use a mix of apple and alder wood pellets, filling the channels of the AMNPS about 2/3 of the way up…light the pellets with a torch, though a small hole in the end of the smoker.

Once the pellets are burning, blow out any open flame, and set in the box. 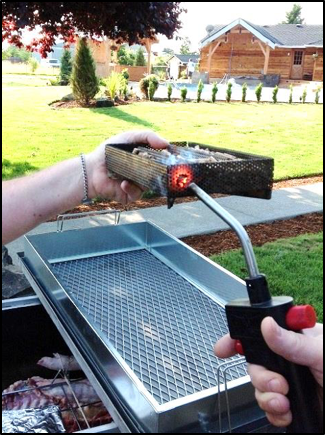 Add the clams, close lid and cook, opening and shaking the pan after the clams open, (about 5 minutes) to get the marinade into the shells. Let rest, lid askew, for 2-3 minutes, then, using a slotted spoon, transfer the clams to a large bowl; discard any clams that do not open 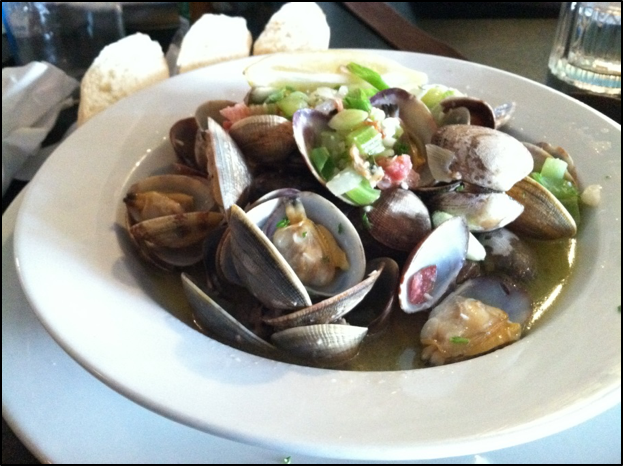 Add a dash or two of salt, then pour the butter over the clams, toss to combine, sprinkle with diced green onions, and serve immediately with toasted French bread and ice-cold sake.

NOTE: I make a larger batch of sauce than the original recipe, as I like to mix the leftover sauce 50/50 with hot water and make a killer clam risotto with it. 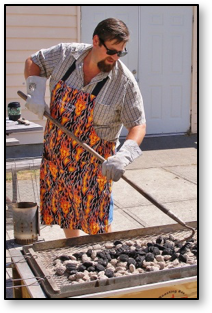 Getting the Most out of Your Accessories: Smokers for La Caja China

I own two models of “smoke units” for my various La Caja Chinas: The Smoker Pistol, and the A-Maze-n Wood Pellet Smoker, both box and tubes.The Smoker Pistol is an electric smoke generator that mounts to the outside of the box and blows in smoke from a single-use cartridge (you purchase the cartridges in multiples). Given average temps and [...]

In Texas, barbecue means beef, particularly untrimmed brisket, that’s been slow-cooked over charcoal or wood in above ground smokers.No sauce is used before or during cooking. Pepper and salt are the most common seasonings. A thick tomato-based sauce with a sweet and spicy taste, thinned with vinegar, is served on the side of the barbecue meal. Beans, potato [...]

Smoking With Your A-Maze-N Pellet Smoker

From novices to BBQ experts, you may have heard at one point or another someone mention a little bit about smoking meats and other foods. What some of them don’t tell is that there are 2 types of smoking. Cold Smoking is the process of adding wood smoke flavor to food without exposing it to heat, while maintaining temperatures below 100º F. [...]