A hot juicy steak sizzling on the grill, crusted with salt, cooked to a perfect medium-rare, and properly rested...is there anything better?

The National Cattlemen’s Beef Association suggest twenty-eight steaks or beef fillets that are best for live-fire grilling, in a wide variety of flavors textures, natural tenderness, and price-range.

Of these, my personal favorite to grill are, in order:

Cut from the short-loin, strip is commonly referred to as a New York strip, it’s also known as a Kansas City strip, top loin, Delmonico, or shell steak, depending on where you find it. My favorite cut for flavor, when I just want a nice, thick steak. 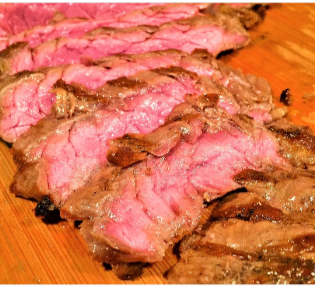 Cut from the diaphragm, this boneless cut is often marinated before grilling; slice it thinly across the grain for tenderness.

Marbling refers to the amount of fat distributed within the meat, and it’s your best indicator of beef quality. Marbling are the squiggly white lines running through the muscle fibers, NOT the large chunks of white fat (also known as gristle).

The more squiggles, the more flavor, and the more tender your steak! 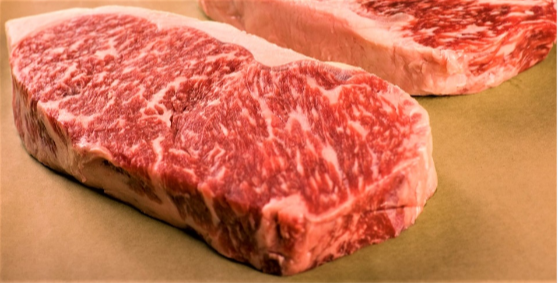 Your beef should be a heathy, bright (but not unnatural) red in color, with bright white fat. Also, there should be little or no odor to the meat.

Tips for Prepping Your Steaks

Chef’s Tip: If your steak is stuck to the grill, leave it alone. Once perfectly crusted, the grill will “let go” of the meat. Don’t force it!

I prefer my steak somewhere between rare and medium rare, and I won't cook a steak beyond medium.

The cow is already dead, I see no point in killing it twice. ;)

To stave off the carnivorous lawyers, I need to mention, that the USDA recommends a minimum safe temperature of 145 °F.

Now you know…let the griller beware! ;)

Allow your steaks rest for at least five minutes. Contrary to popular belief, this is NOT to “redistribute the juices” but instead, as the temperature of the meat begins to drop from its maximum, the viscosity of the meat juices increases (think hot oil vs. cold oil in your car’s engine) until it’s thick enough to stay trapped in the muscle fibers, when cut.

Chef’s rule of thumb: An unrested steak is a ruined steak, the moment you cut into it.