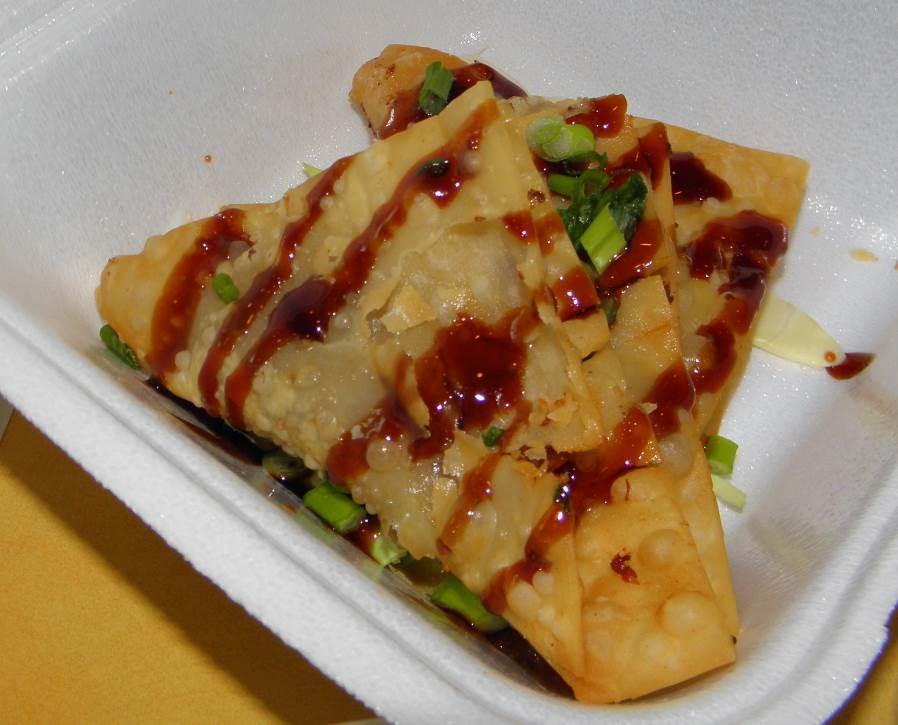 I know, I know…everyone snickers when I talk about recipes for “leftover” roast pork…but sometimes it does happen (especially if you bag up a pound or two of the good parts before serving!)

On our recent trip to Oahu, we visited Poke Stop on our food crawl. One of the sides we tried there were Kalua Pork Wontons…and they were awesome!

The next time I cooked up a simple kalua pork shoulder in my La Caja China, I slipped a little into the fridge when no one was looking, and away we went! What’s great about this recipe, besides that it’s amazingly easy and delicious, is that it would work equally great with left-over pulled pork bbq, brisket, bbq chicken, even rib meat!

Any meat that can be shredded or chopped will work. Top with your favorite thick sauce, and quick as you can say “pig pickin'” you’ve got yourself a tasty appetizer that looks fancy, and tastes great, while still being (let’s face facts) a cheap recipe for left-overs!

I’ve included the recipes for both the wontons (deep fried) and the dumplings (steamed). Both were very good, though I gotta admit a slight preference for the wontons.

It’s hard to beat deep-fried anything, ya know?

Put a scant tablespoon of pork in the center of a wrapper. Squirt or spoon a small amount of sauce over the meat Moisten the edges liberally with water with your fingers and fold wrapper corner to corner to form a triangle.

Be sure edges are sealed and no filling is seeping out or your wonton may come apart.

You can also use a dumpling press, which, ironically, I have a whole set of but forgot about them until I was done!

If not, lightly press the very outer edges with the end of a fork to ensure a seal (and because the crease marks make a nice decorative touch).

Spray both sides of wonton with Pam to prevent sticking and transfer to a plate while making the rest of the batch. I do 6-8 at a time, and have just about enough time to make a second batch, while the first is cooking.

Wontons can be prepared ahead of time up to the cooking stage and frozen. Thaw before cooking.

Heat 1 1/2 – 2 inches of oil to 360 degrees. Add wontons in small batches and fry, turning once, about 1 minute per side, or until golden brown.

Remove with a slotted spoon and drain on paper towels. Serve with warm Unagi sauce on the side, or drizzled over the top.

If you have a Chinese steamer, cool (I don’t), but a metal vegetable steamer works fine, too. I use a 10 inch stock pot that has a tight fitting lid with about 2 inches boiling water going.

Spray basket well with Pam and then stack a single layer of the dumplings in the steamer.

Spray dumplings again. They may touch or overlap as long as they are sprayed well. Place steamer in pot and steam for 10 minutes (water level should be just below steamer basket). Transfer to a covered dish and toss with a few TB of water to prevent sticking. Sprinkle with sea salt.

Repeat with the other batches. Serve with the dipping sauce. If you want pot-stickers, sauté towel-dried dumplings in a few tablespoons of oil until lightly brown on one or both sides. Serve with hot sticky rice and warm Unagi sauce on the side, or drizzled over the top.

If this seems very complicated- it’s not- just a little labor intensive…and the results are SO worth it!

To make your own sauce: