In Texas, barbecue means beef, particularly untrimmed brisket, that’s been slow-cooked over charcoal or wood in above ground smokers.

No sauce is used before or during cooking. Pepper and salt are the most common seasonings. A thick tomato-based sauce with a sweet and spicy taste, thinned with vinegar, is served on the side of the barbecue meal.

First and foremost, if you have a frozen brisket, let it thaw in the refrigerator for 2 days to defrost thoroughly. Two hours before you plan to begin cooking, take the brisket from the refrigerator. Remove the plastic packaging, rinse brisket well with cool water, and pat dry. Let the meat rest on the counter for a couple of hours to bring the internal temp up. 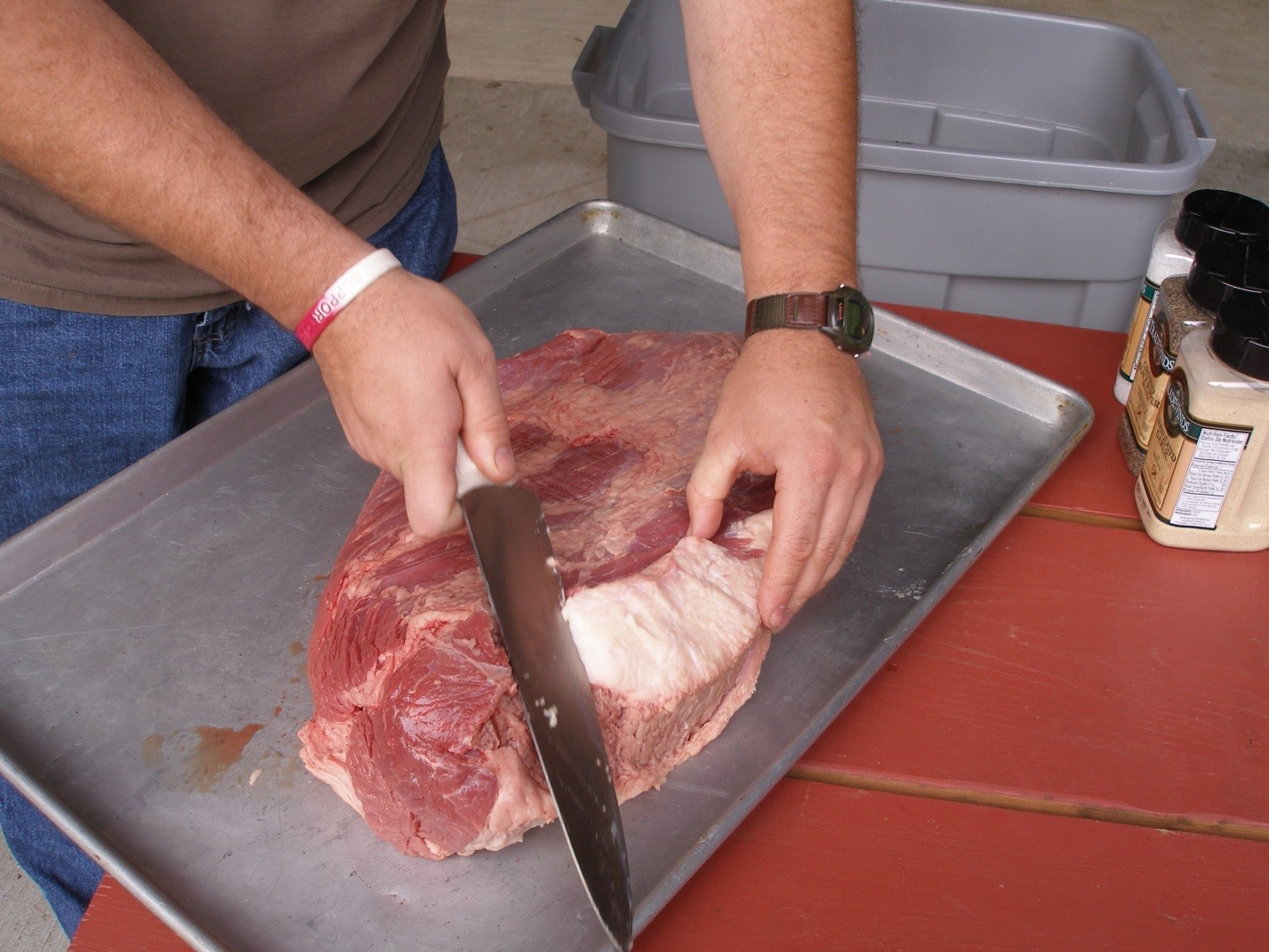 Trimming: Place the brisket on a sheet pan, and trim any excess fat (more than ½ inch thick) DO NOT remove all of the fat; as that will provide moisture and flavor as the brisket cooks. 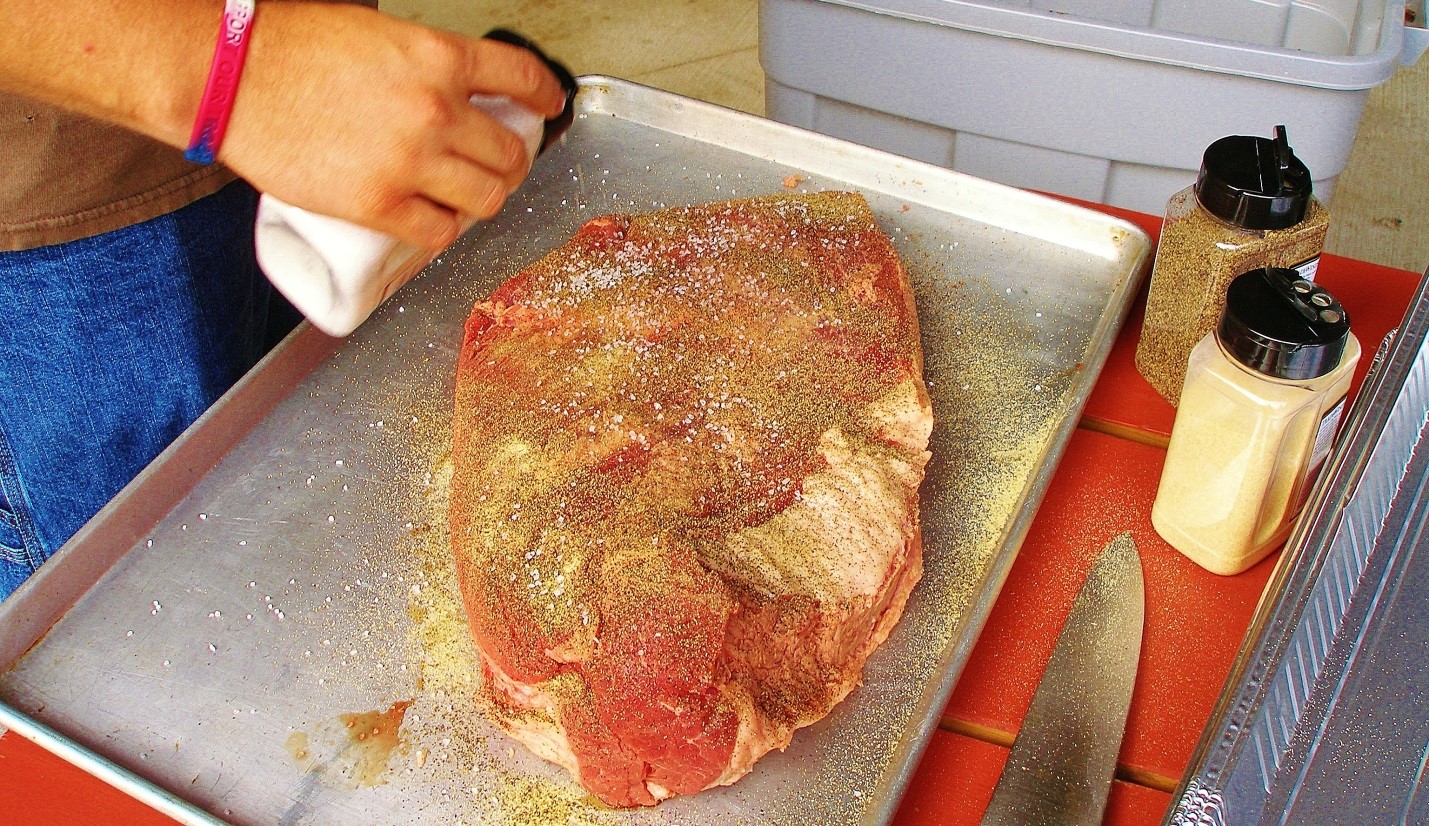 Seasoning: Brisket doesn’t need a lot of spices, but it needs a lot of a few spices. Rub your packer brisket heavily with fine sea salt, coarse black pepper, and granulated garlic.

Reheating: Spritz the meat with apple juice and add 1/8" of the same juice to the bottom of the pan. Cover tightly with foil and heat in a 200-250°F oven until warmed to your liking. Just before serving, brush on a thin layer of your favorite barbecue sauce to give the slices a nice sheen.

If you prefer to keep the cooked brisket whole and unsliced, wrap it in foil and refrigerate. Before reheating, open the foil and add some juice or broth as described above, and close the foil tightly.

Resting Time: At a minimum, place the brisket on a rimmed baking pan, cover loosely with foil, and let rest 30 minutes before slicing. 60-90 minutes is better.

Brisket Yield: When you take into account the trimming of the brisket before and after cooking, plus the shrinkage that occurs during cooking, don't be surprised if you end up with a 50% yield of edible meat from a whole, untrimmed brisket.

That means 6 pounds of edible meat from a 12 pound brisket. Depending on the brisket and the internal temp you cook it to, it may be as low as 40% or as high as 60%.

If you're cooking brisket for a party, figure 4-5 ounces of meat per sandwich or 6 ounces of sliced meat on a plate (8 ounces for hearty eaters). Using a 40% yield, just to be safe, a 12 pound brisket yields 19 4-ounce sandwiches or almost 13 6-ounce plate servings. 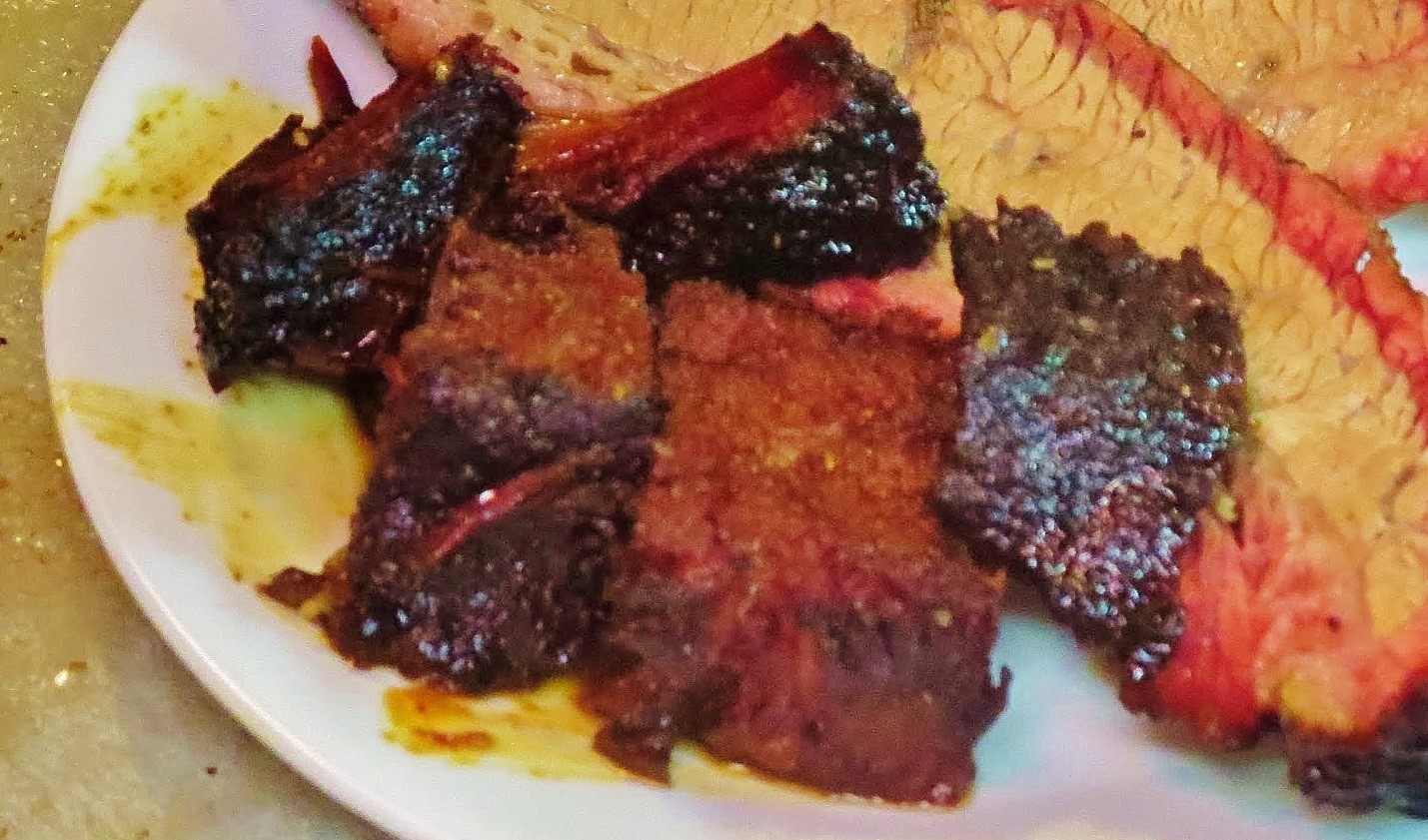 Burnt Ends: Traditionally, burnt ends sold in restaurants were the dry edges and leftover bits and pieces of the brisket flat after slicing, mixed with barbecue sauce. These morsels were highly

Another approach for making burnt ends is to separate the point section from the flat section after the flat is done, then return the point to the cooker for smoke for an additional 4-6 hours.

Chop the point, mix with barbecue sauce, and enjoy! 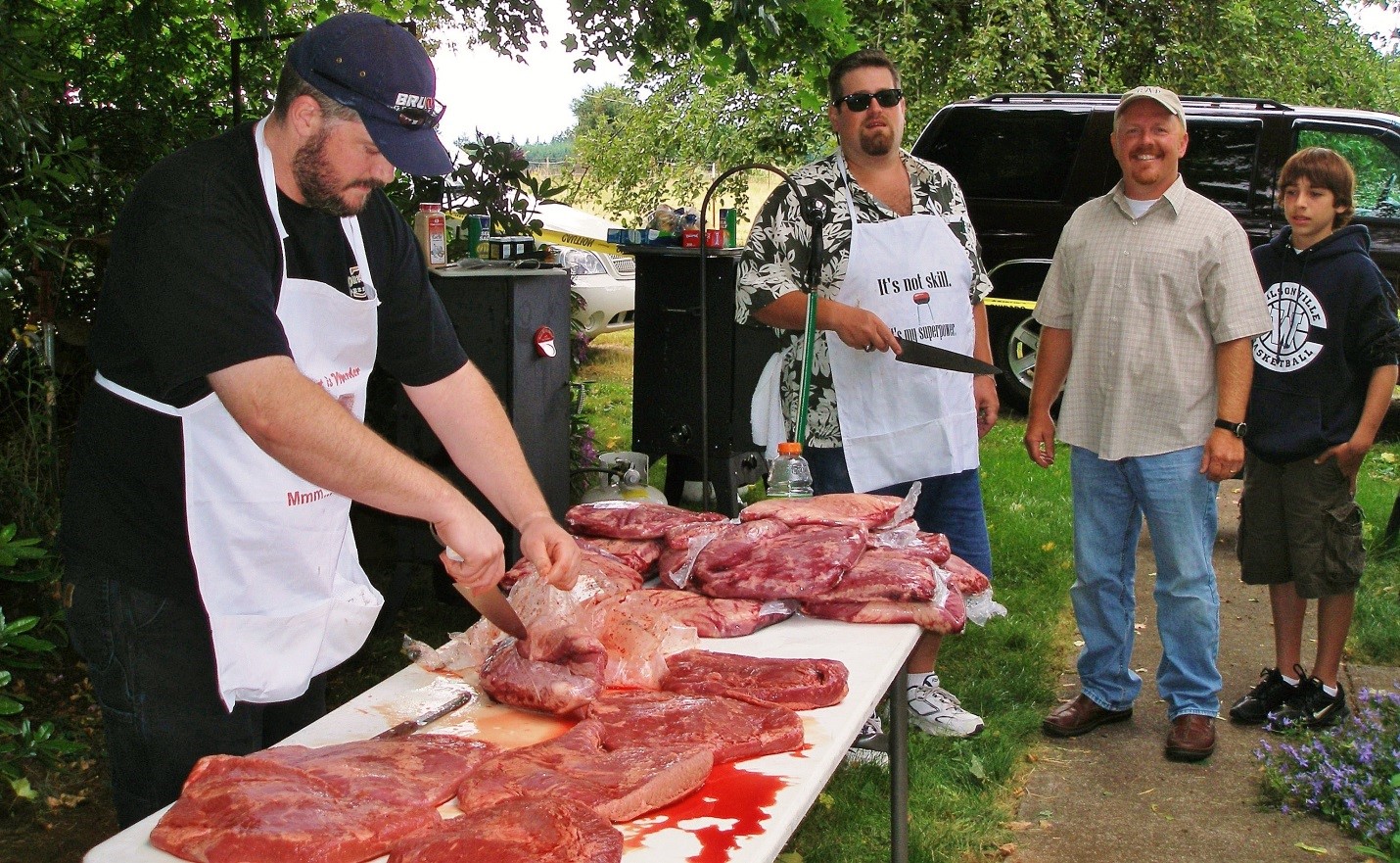 Everything can be ready ahead of time: mix the dry rub and make the basting sauce days ahead of time; have the charcoal and heavy-duty aluminum foil on hand.

Brisket: Buy an untrimmed (sometimes called packer style) brisket available at most grocery stores. It will have a thick cap of fat, and is usually in heavy plastic packaging.

Three 14-pound briskets fit nicely in La Caja China; briskets are available in sizes from about 8 pounds and up. Calculate about 2 servings per pound. Don't underestimate quantity, as you probably won't have much left over!

The night before you plan to begin cooking, rinse the briskets, and pat dry. Place the briskets in large disposable pans and generously apply the dry rub, to all meat surfaces. Refrigerate overnight.

Once hour before cooking, remove the briskets from the cooler and let stand at room temperature until cooking time.

Place the brisket in disposable catch pans to catch the drippings. 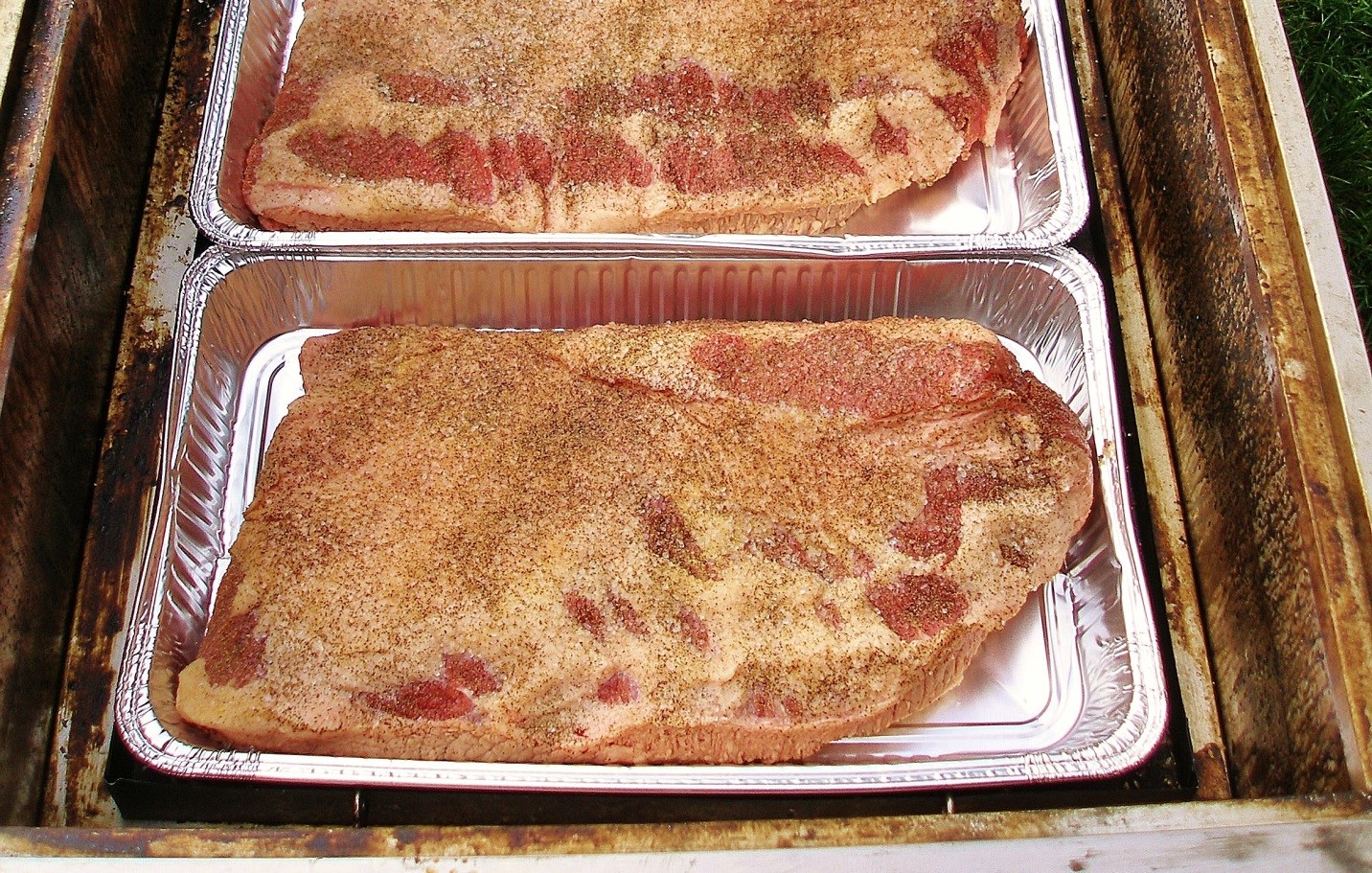 Fill the A-Maze-N Smoker properly with approximately 1 lb. of pellets, or 1" from the top on the tube smokers. 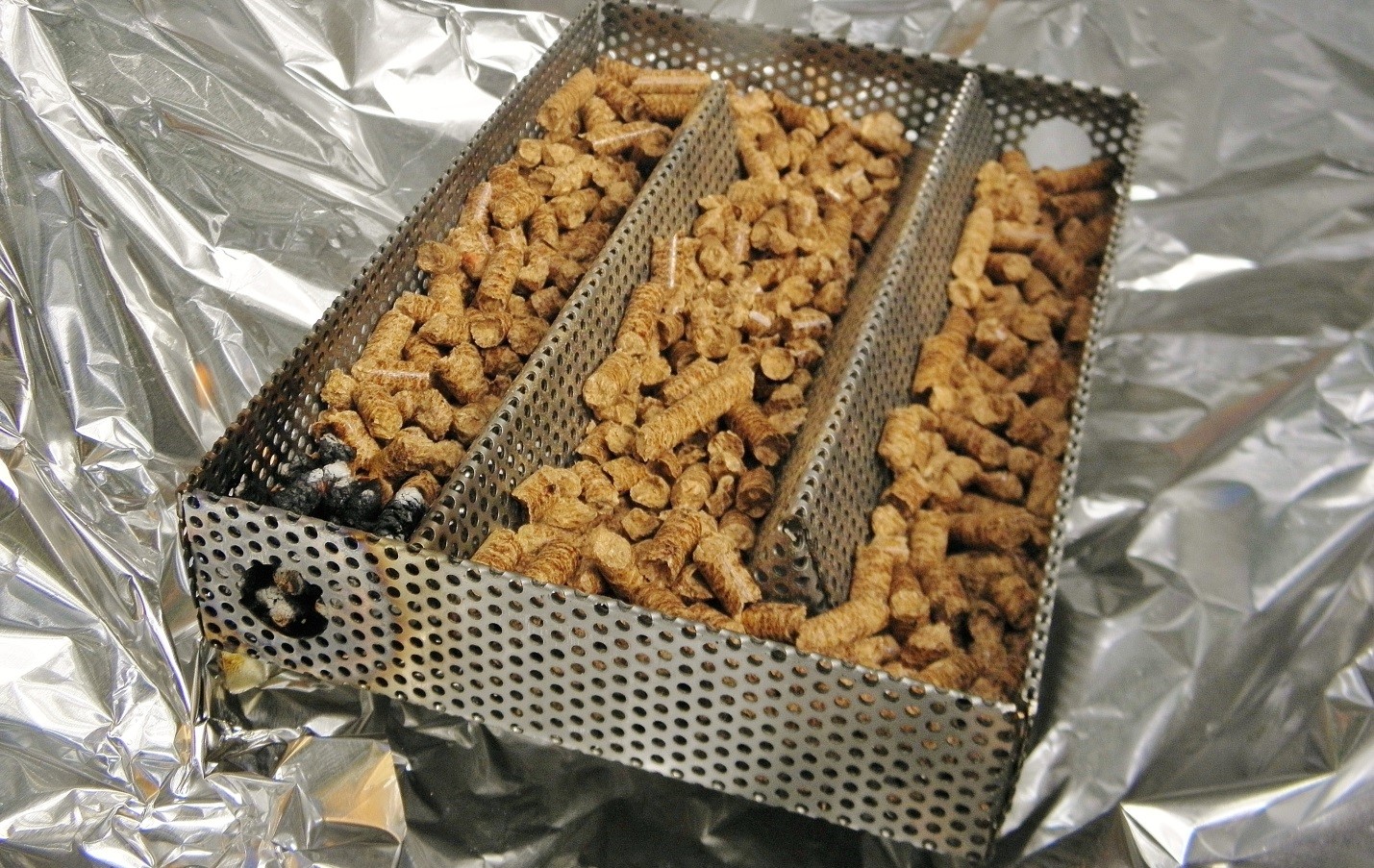 Light the smoker with a propane torch on low, through the starter hole for 45 seconds.

Allow pellets to burn for 10 minutes, then blow the flame out. Place in an area of your grill that has good ventilation. 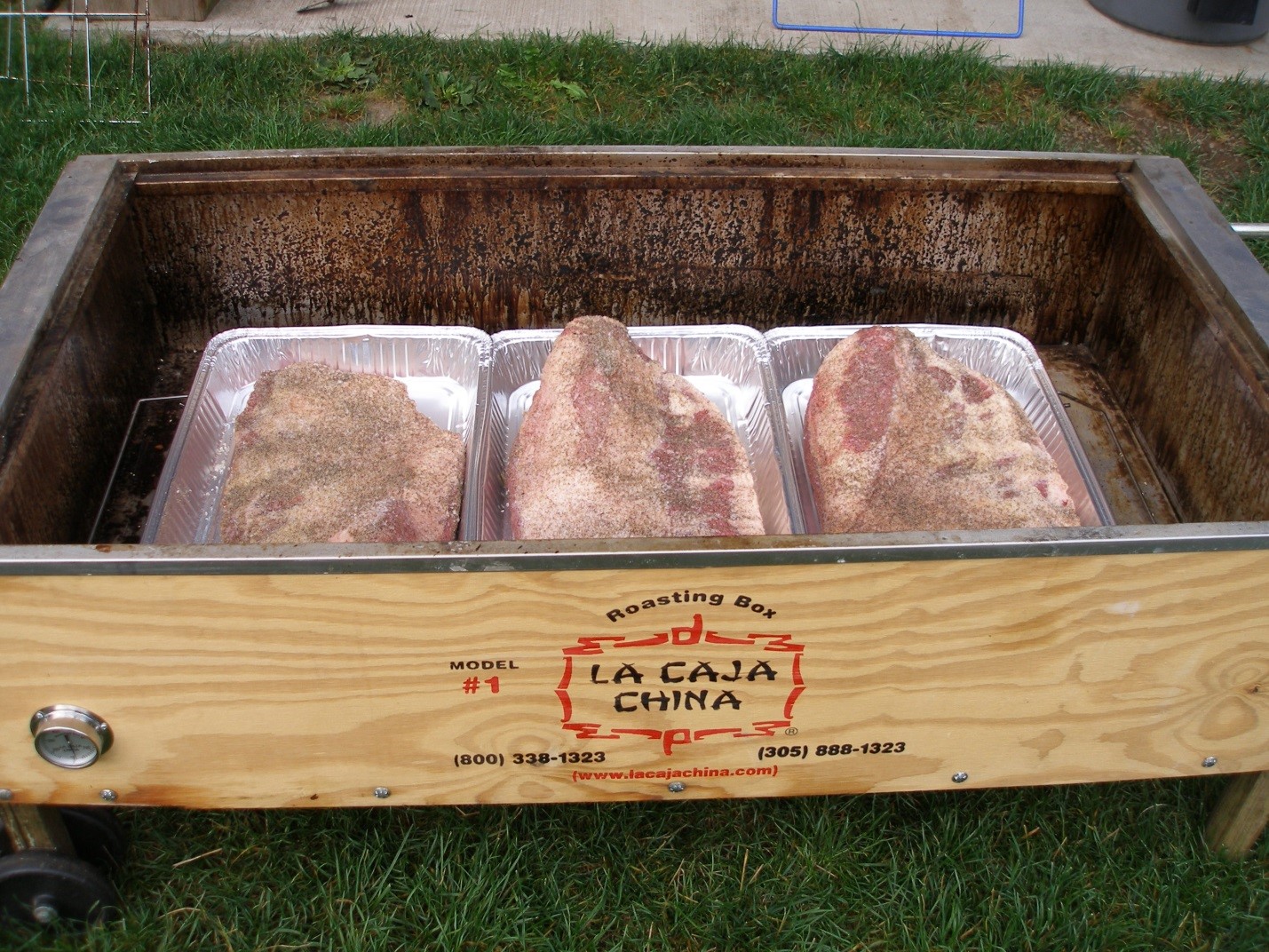 Cover the box with the ash pan and charcoal grid, and add 16 lbs. of charcoal for Model #1, or 18lbs. for Model #2 and light up. Allow about 20 minutes for coals to burn evenly.

After 20 minutes, spread the coals evenly over the surface of the charcoal pan. Cooking time starts right now. 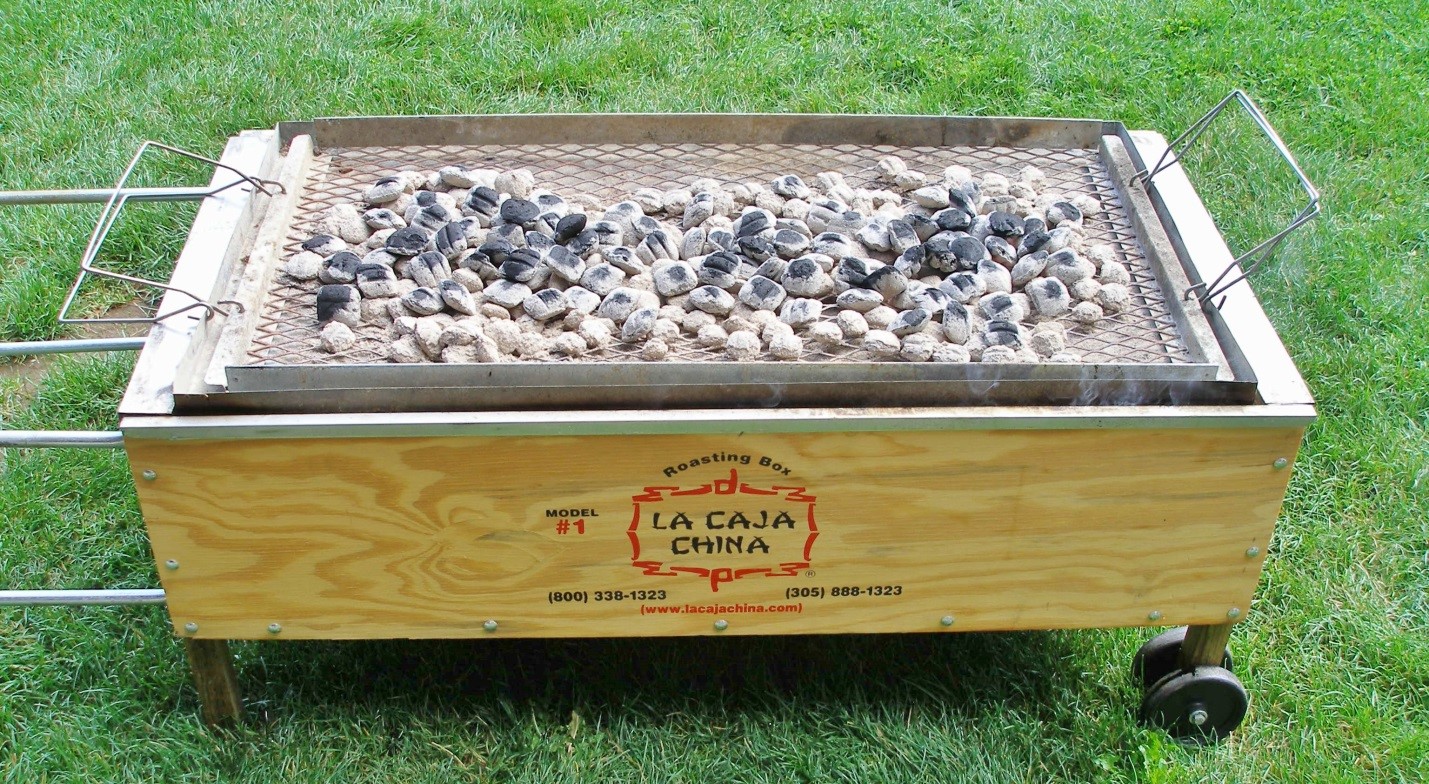 Continue to add 10 lbs. of charcoal every hour until you reach the desired temperature on the meat thermometer.

IMPORTANT: DO NOT OPEN THE BOX UNTIL YOU REACH THE DESIRED TEMPERATURE!

Once you’ve cooked the briskets to an internal temperature above 190 degrees F, it's time to wrap them. 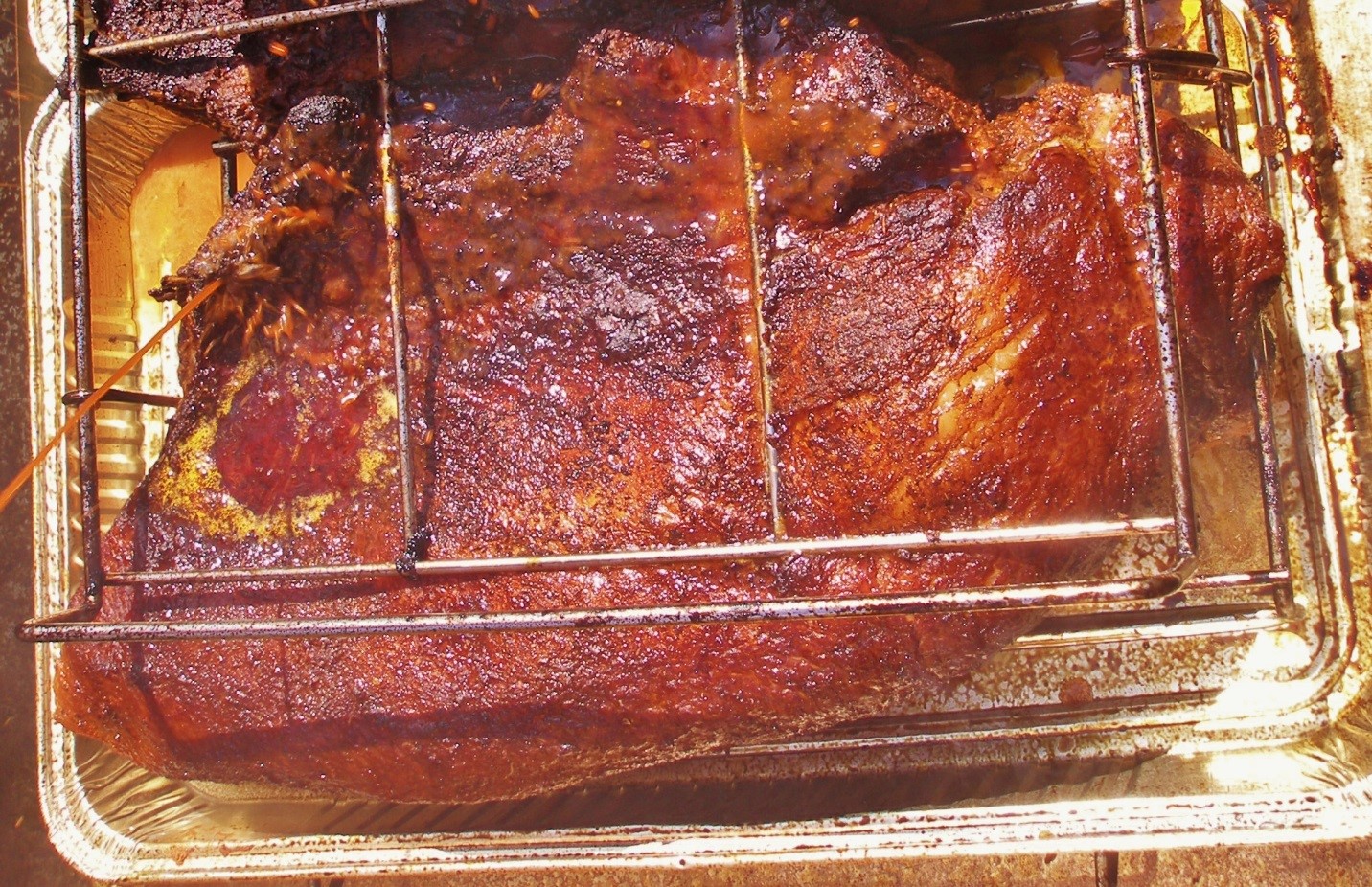 Remove the briskets from La Caja China, mop with warmed sauce (optional) and wrap each in a double layer of aluminum foil as tight as you can. The internal temperature will continue to climb.

Wrap the foil-wrapped briskets in towels and place the in an empty cooler. Let the briskets sit for 60 to 90 minutes before checking the internal temperature again. Once you reach 190 degrees your briskets are cooked and rested.

Cut back the fat layer on the top of the brisket to expose the meat. Then, working from the thin end of the brisket, cut long thin slices about the thickness of a pencil, against the grain of the meat, paying attention as the grain direction changes. 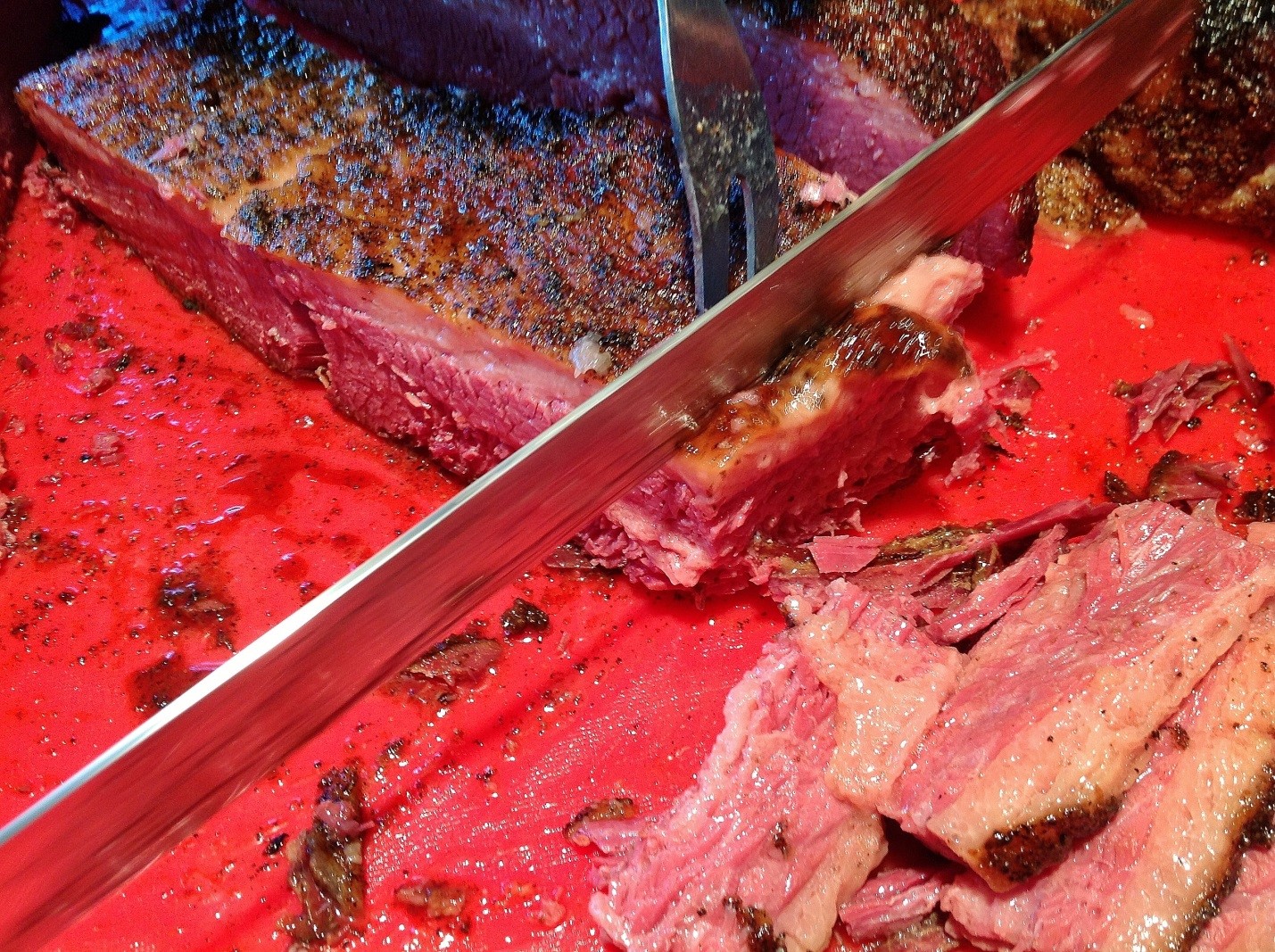 If you find that the brisket is a little tough, cut it thinner. If the brisket starts to fall apart, cut the slices thicker. Trim off any large pieces of fat as you go.

I like to place my cutting-board with one end over the edge of the sink and the other end propped up slightly. Place a pan in the bottom of the sink to catch the juices that run out as you go. These can be poured back over the meat after it's carved. 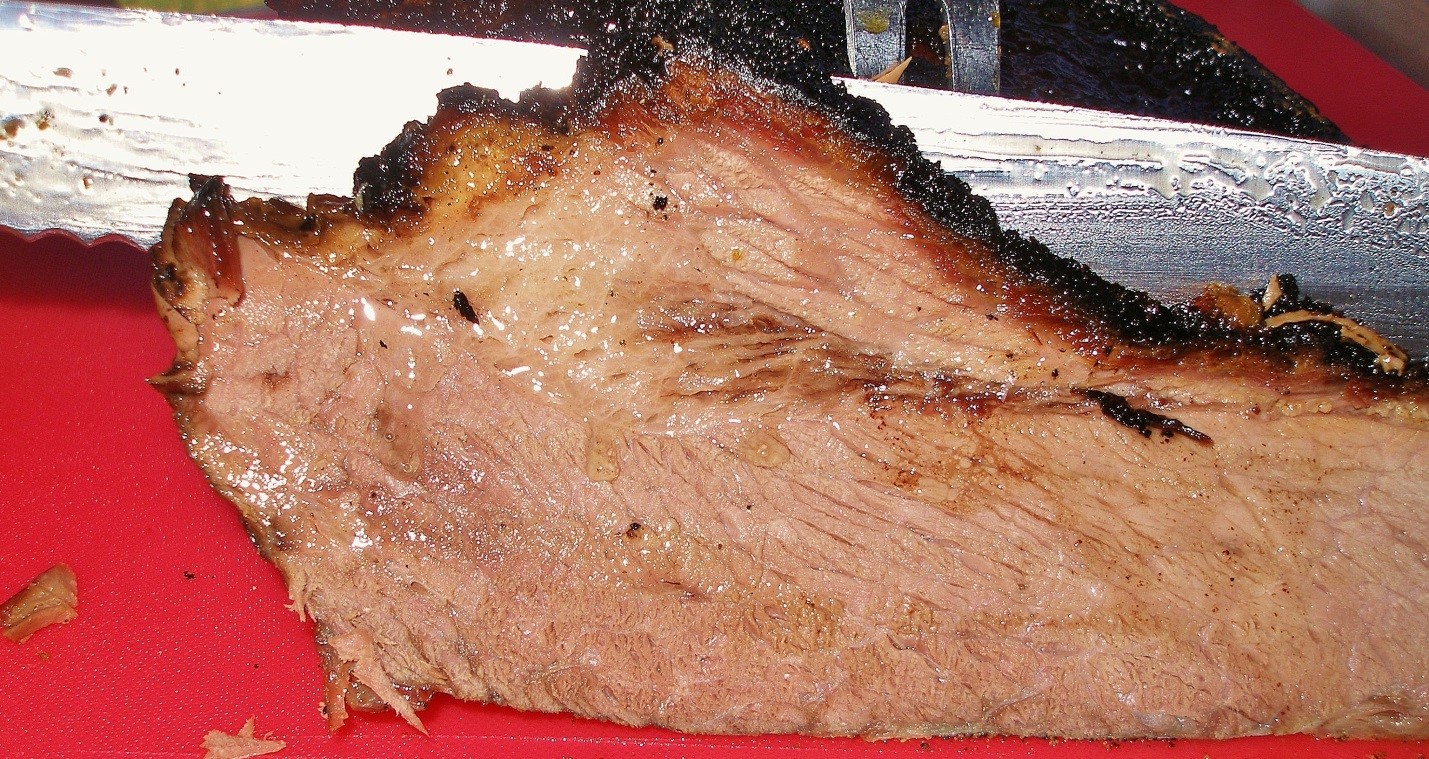 You'll have several cups of meat juices trapped in the pans as well. Save any juices that you don't serve with the meat, it's great in beans and sauces.

Your briskets will probably come out of the box black and charred, especially is you used a sugar-based rub. (Don’t panic…that’s flavor!)

The brisket is placed fat-side up for just this reason, to protect the meat. This fat cap will be sliced and tossed later, anyway. 50 pounds of brisket will generously serve 100 people.

The meat is very rich and diners who are unfamiliar with it often take more that they can eat. I always serve the brisket myself, at the end of a buffet-line, when I cook for a crowd.