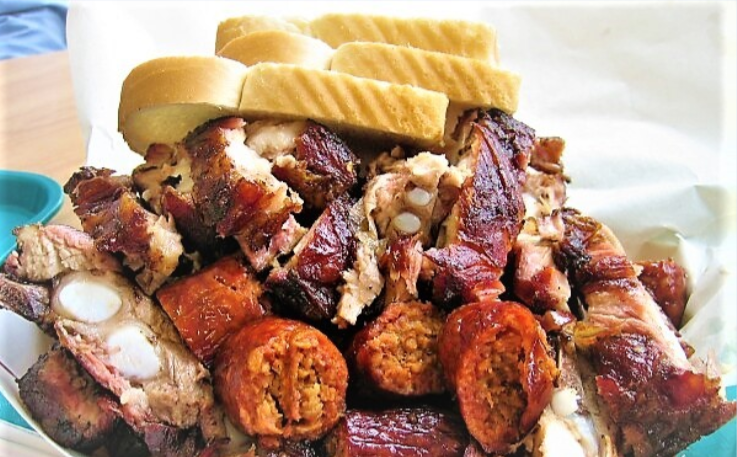 
Chicago-style BBQ has it roots in three important historical events. The opening of the Union Stockyards in 1865, and the migrations of both Eastern Europeans, and African American (mainly from the Mississippi Delta) around the same time.

The first brought their traditions of boiled and smoked meats and sausages, while the second brought generations of experience turning less popular cuts (read: tough) into tender, delicious BBQ with low and slow cooking techniques, as well as saucing to improve the flavors and textures of meat. 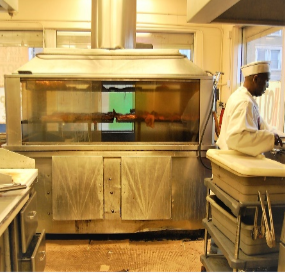 Signature Chicago-style BBQ is typically smoked ribs, or pork butt covered in sauce, more expensive cuts popular on the more affluent North Side of the city, or the classic rib tip combo served with sausage, sauce, French fries, and white bread. Rib-tips (trimmed strips of fatty, cartilage-rich rib meat) are especially unique to the region, specifically the South Side, was a cut that was often discarded, or given away for free from the butchery epicenter that Chicago had become by the early 1920's.

So popular are these rib tips that locals lovingly refer to them as "meat candy" and is commonly compared to bacon as a rich, indulgent treat.

Another unique and defining characteristic of "true" South and West Side Chicago barbecue is the aquarium smoker, a tempered-glass encased cooker introduced in 1954, that resembles a massive fish tank, with a smoke-stack leading up through the roof of the kitchen or dining area.

The largest, a gargantuan 64-square-feet beast, is the key attraction of the popular Lem's BBQ on 75th Street.

Custom-made and expensive, aquarium smoker can be temperamental and labor-intensive, but produce amazing results.

Northside BBQ tends to rely more on large, enclosed rotisserie smokers where whole briskets and pork shoulders spin on racks in low, indirect heat and smoke from hardwoods burning in the adjacent chamber. 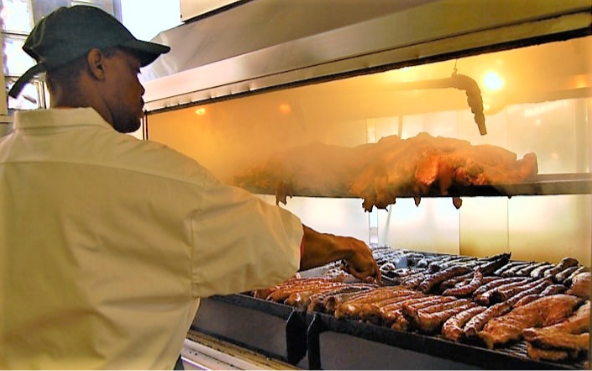 Though no one can question the delicious results, hard-core BBQ fans from outside these neighborhoods are often dismissive or even disdainful of the authenticity of Northside BBQ smokers for their reliance on gas for heat, instead of on the burning wood.

Both areas, however, insist on red oak as their smoking wood of choice, with just a few rebels holding out for apple or cherry-wood.

Tomato-based sauces, sweetened with sugar or honey, and a mild tang of vinegar, rule the day across the board, though tend to be a little thinner in the Southern neighborhoods. And, the like a lot of it, slathering it on their smoked meat, and serving additional sauce (warm) on the side, for dipping. Most Chicagoans follow the mantra, "It ain't barbecue without the sauce."

Personally, I disagree...but then, I'm not from Chicago, either! ;) 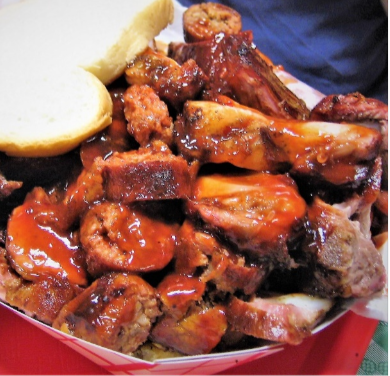 Combine all ingredients in a large pot, bring to a low simmer, whisking until smooth.

Chef's Tip: The sweet sauce is great right out of the pot, but to really taste it at it's best, pour the cooled sauce into a glass container, seal, and let rest in the refrigerator for 2-3 days to allow the flavors to mellow and marry.