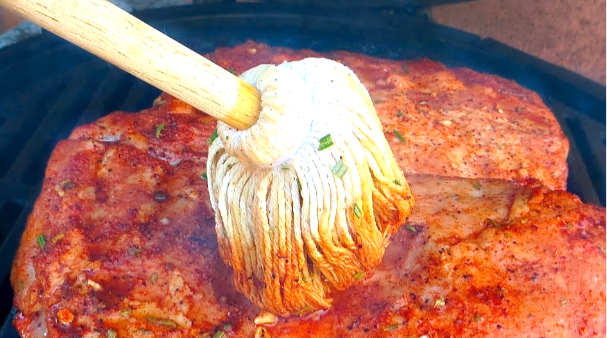 
Barbecue "Mops" or basting sauces, are typically thin, vinegar-based liquids that are applied to meats during the slow cooking process of traditional barbecue, to keep the meat moist and add flavor. Tomato juice, vinegar, apple cider, beer, citrus juices, or a combination of the above, are typical ingredients.

Mops have been used for almost as long as meat has been cooked over fire. In the old, open-air pits, moisture would steam off during the long hours of slow cooking over red-hot coals. Mopping helped the meat retain its moistures and stay tender, instead of becoming giant slabs of jerky. 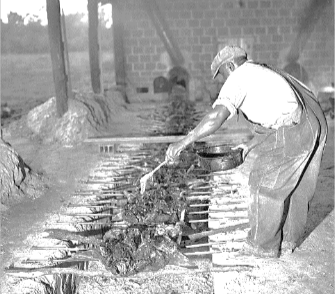 Legend has it that President Johnson liked his barbecue, and often called upon his favorite Pitmaster to cook for hundreds of guests.

The meal would be cooked on a forty square-foot open air fire pit.

The cook would cover every inch of this in ribs, briskets, halved pigs, and just about any other meat he could think of.

To keep all that meat moist, he mopped it with a thinned sauce...using a real mop. Hence the barbecue term, "mop."

Today you can buy a miniature tool that looks like a kitchen mop to mop your meat. the cotton fibers hold the thin mop sauce and make it easy to dash large amounts on at once. It’s preferable to a basting brush, as it’s less likely to wipe off seasoning that are already on the meat.

Combine all ingredients and bring to a simmer, allow to cool overnight to help the flavors marry.

Keep warm and apply to meat before you close La Caja China, when you flip the meat, and again when the meat is done cooking.

Allow the meat to rest at least 30 minutes to soak up the mop.

Mopping (basting) the meat while cooking helps keep it moist and adds additional flavors. Never use a basting brush on any meat that has a dry rub applied, as it will brush off seasonings.

Mop the meat every 30 minutes for the first half of the cooking time.

Combine all ingredients and bring to a simmer. Allow to cool overnight, and warm before using.

Use as a rib/chicken baste, or sprinkle on pulled or chopped barbecued pork before serving.

Combine all ingredients in a quart jar. Shake to blend thoroughly.

Best if made ahead of time; will keep indefinitely in the refrigerator.

This mop is great for brisket, as well. Keep warm and apply to ribs before you close La Caja China, when you flip the ribs, and again when the ribs are done cooking.